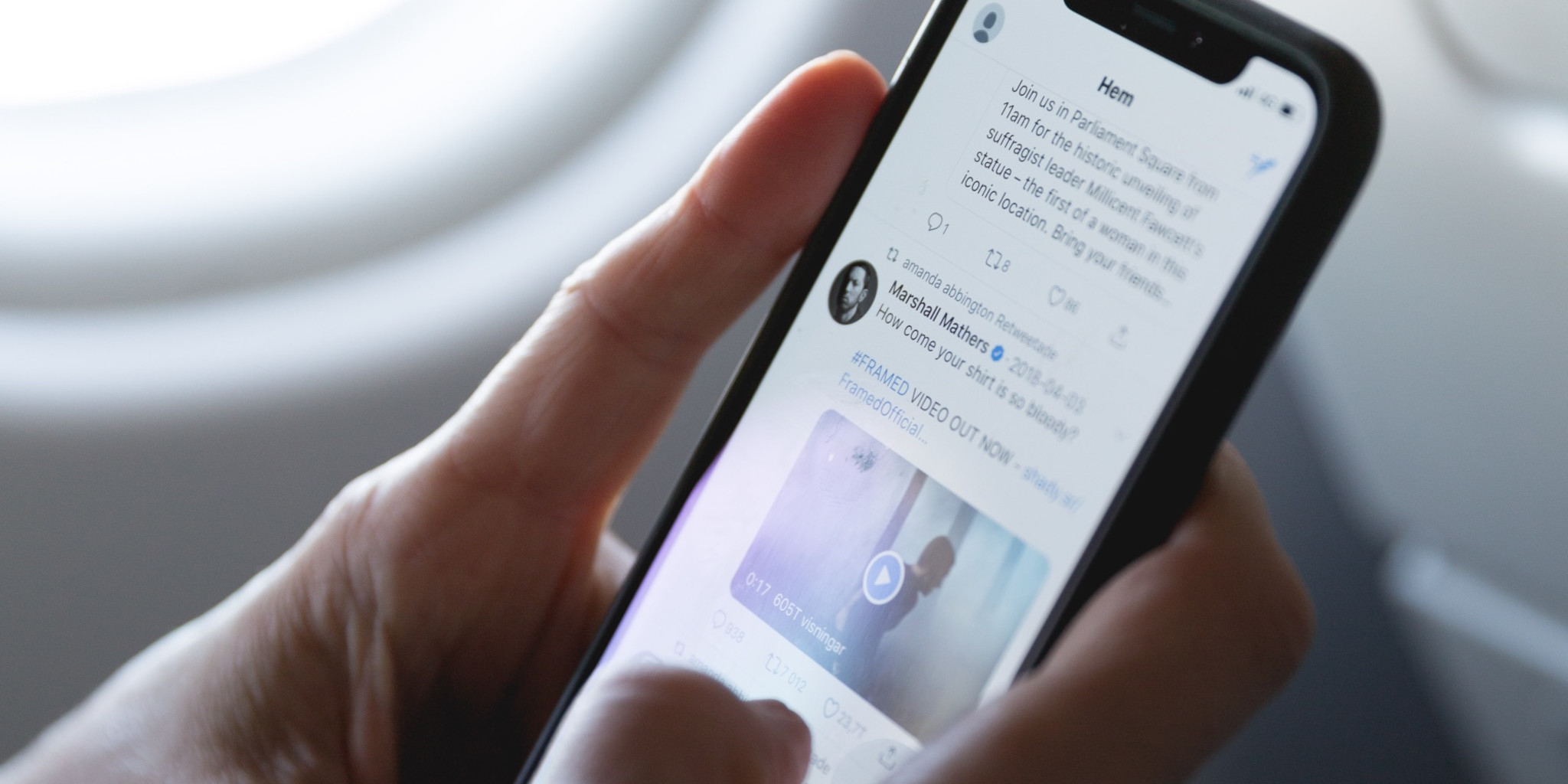 Misunderstood, maligned and misused… does Twitter still deserve a place in your marketing strategy? Besieged by spam and bots, bad press and an expensive advertising model, Twitter has seen a steady decline in active users. This has worried the company enough to stop them publishing transparent user statistics for the market to evaluate. Combined with a smaller user base, imperfect ad targeting and limited platform usage in emerging markets, brands are struggling to see Twitter as anything more than a customer service tool to be monitored.

Doing Twitter well doesn’t mean every brand has to use it the same way. Here are three examples where brands are using the platform very differently, and very successfully.

MERL (aka The Museum of English Rural Life)

A small museum in Reading getting retweeted by Elon Musk? That’s the MERL, having built a reputation for putting out entertaining, irreverent content.

Their viral successes include this absolute unit: 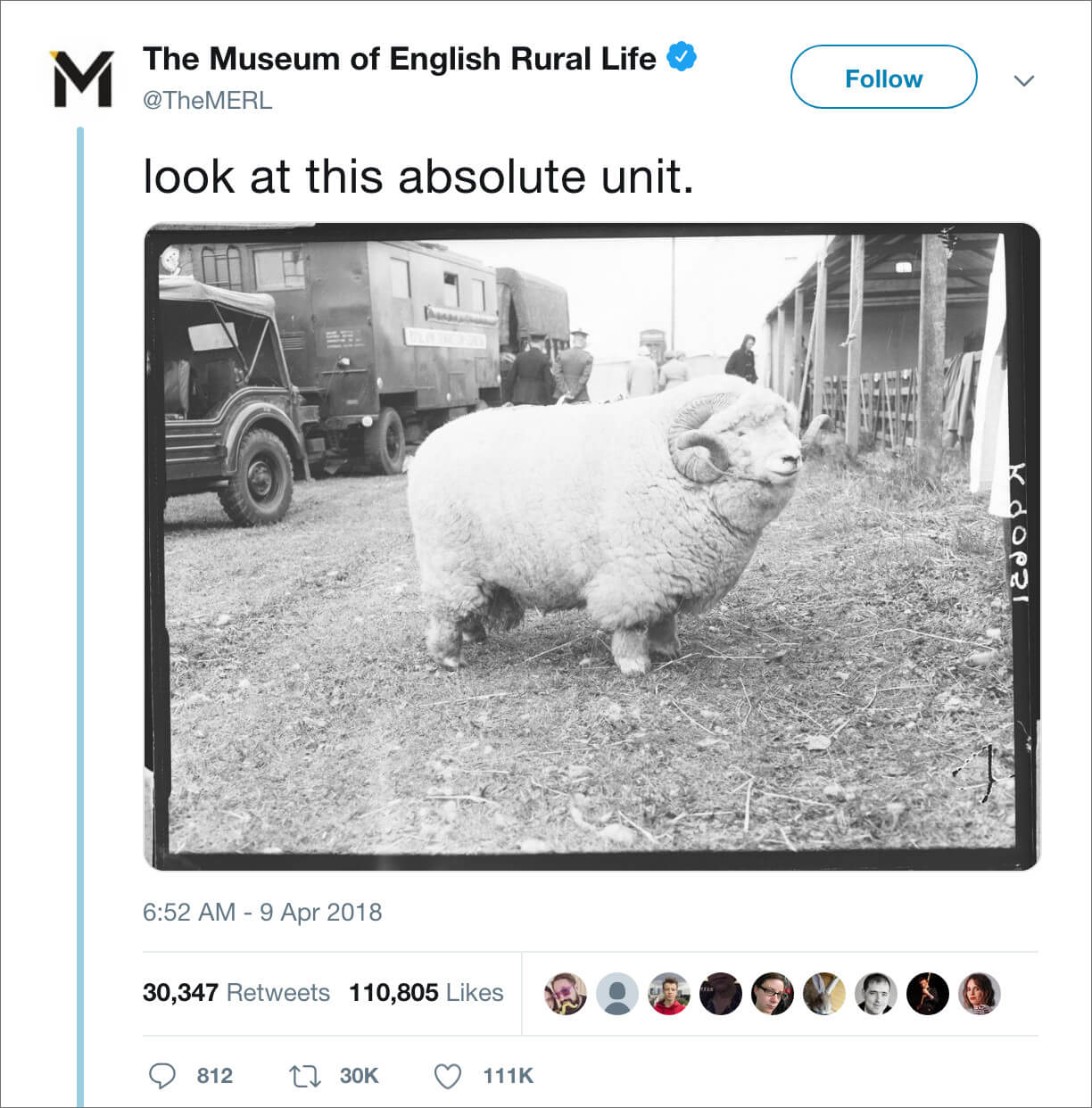 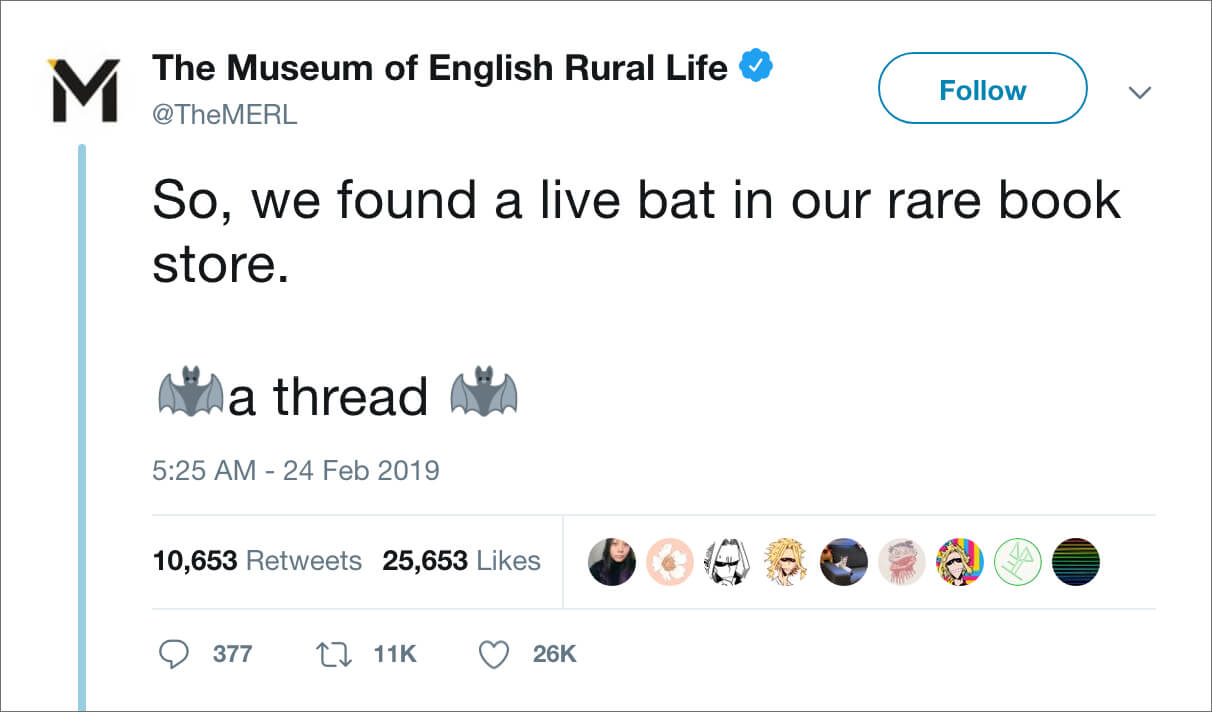 And a little chat about a duck:

It’s not just the killer humour that appeals to audiences. The MERL uses imagery and objects from their archive to start conversations, engage and promote other institutions on a similar and much bigger scale to their own, and are extremely responsive to any momentum their content gets, which in turn helps it snowball. They have misses, most weeks there’s another shot at the next internet sensation which almost always doesn’t work out. But sometimes it does, and it only takes one.

How do you make a dictionary interesting? As well as regular content like word of the day, interesting facts about verbs (apparently there are some) and weekly quizzes, this potentially very boring account has decided to get political.

They reacted with horror to Trump’s election: 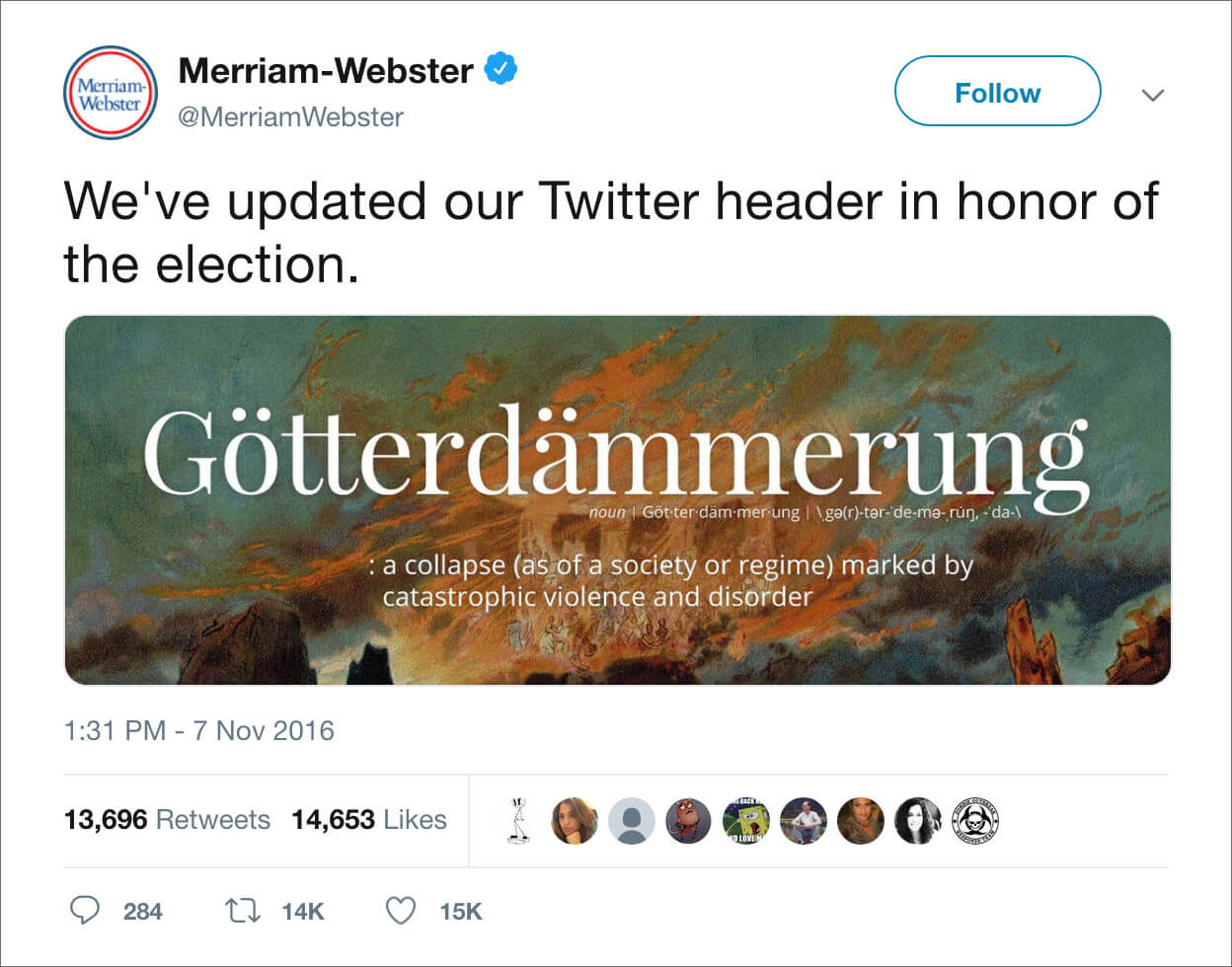 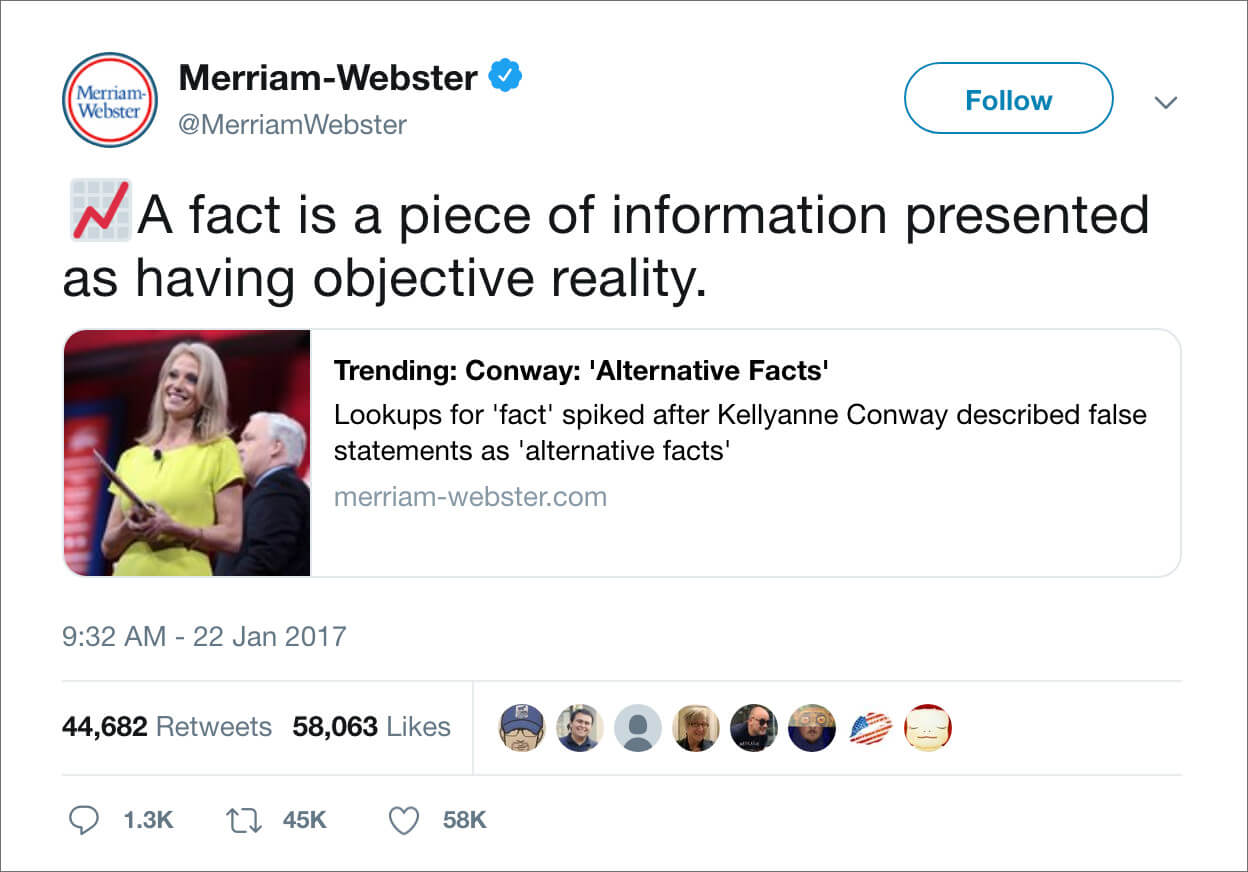 And supported the LGBTQ+ community in an increasingly hostile online environment: 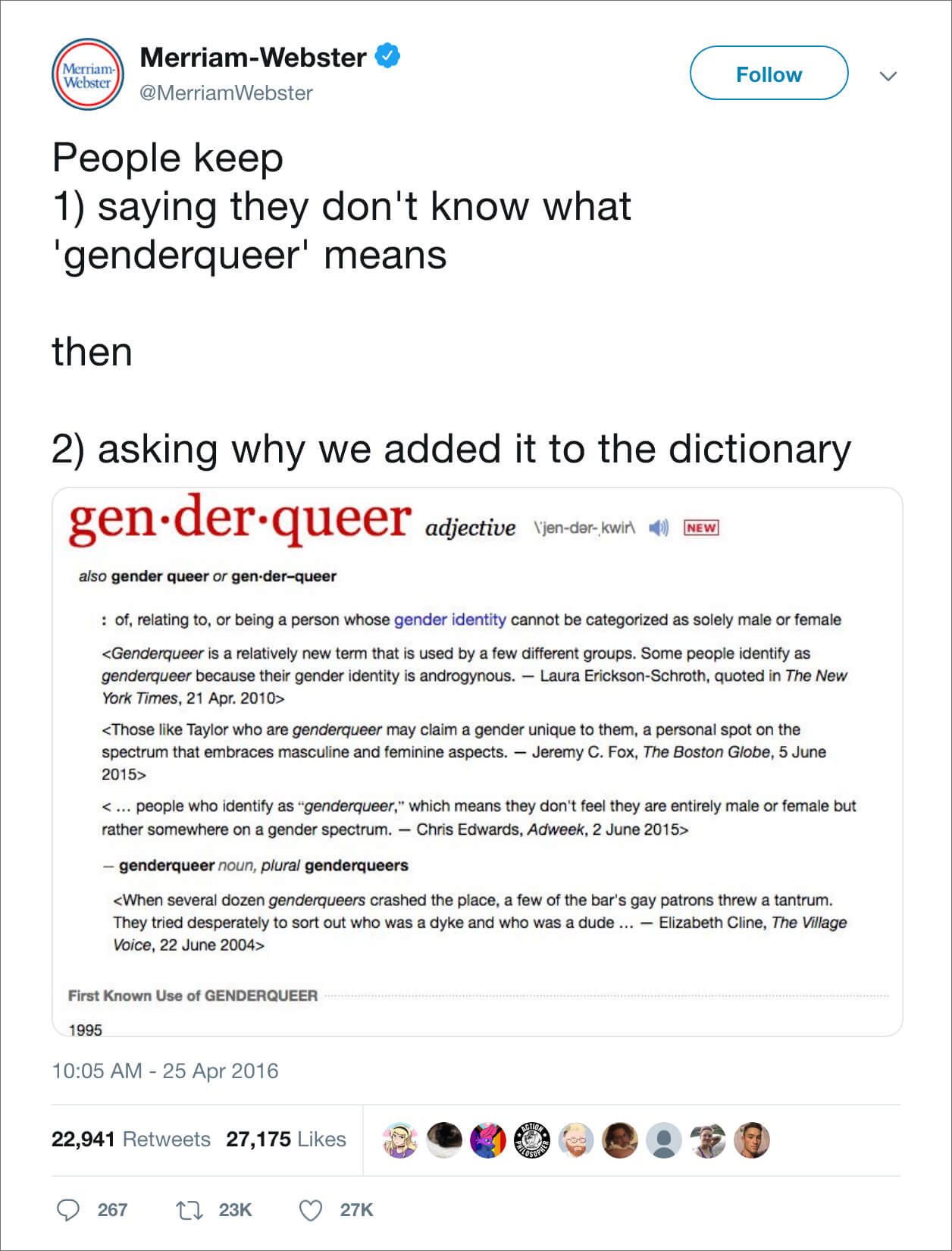 So why is this so special? Organisations, large and small, have traditionally steered clear of espousing political views on either side of the spectrum in order not to isolate a large proportion of their audience. It seems that Merriam-Webster decided, in a time when using words truthfully had become optional in public life, that they, the guardians of those words, would take a stand. The result has made Twitter (and their follower numbers), a much more positive place.

How can a Twitter account be excellent when, other than some tips and tricks, 99% of their 1 million tweets are customer service responses? For many companies Twitter is primarily a customer service portal and, when it’s used efficiently and effectively, there’s no shame in that. After all, your customers *will* complain somewhere, so it’s important you have sight of the conversation and a voice to reply with, regardless of how uncomfortable this makes CEOs.

Apple is a powerhouse of Twitter customer service, dozens of responses an hour, every hour, giving quick fixes where possible, links to how to pages where appropriate, and quietly taking any other queries into the DMs to be dealt with out of the public eye.

Have a scroll through their Tweets & Replies and learn from one of the best: 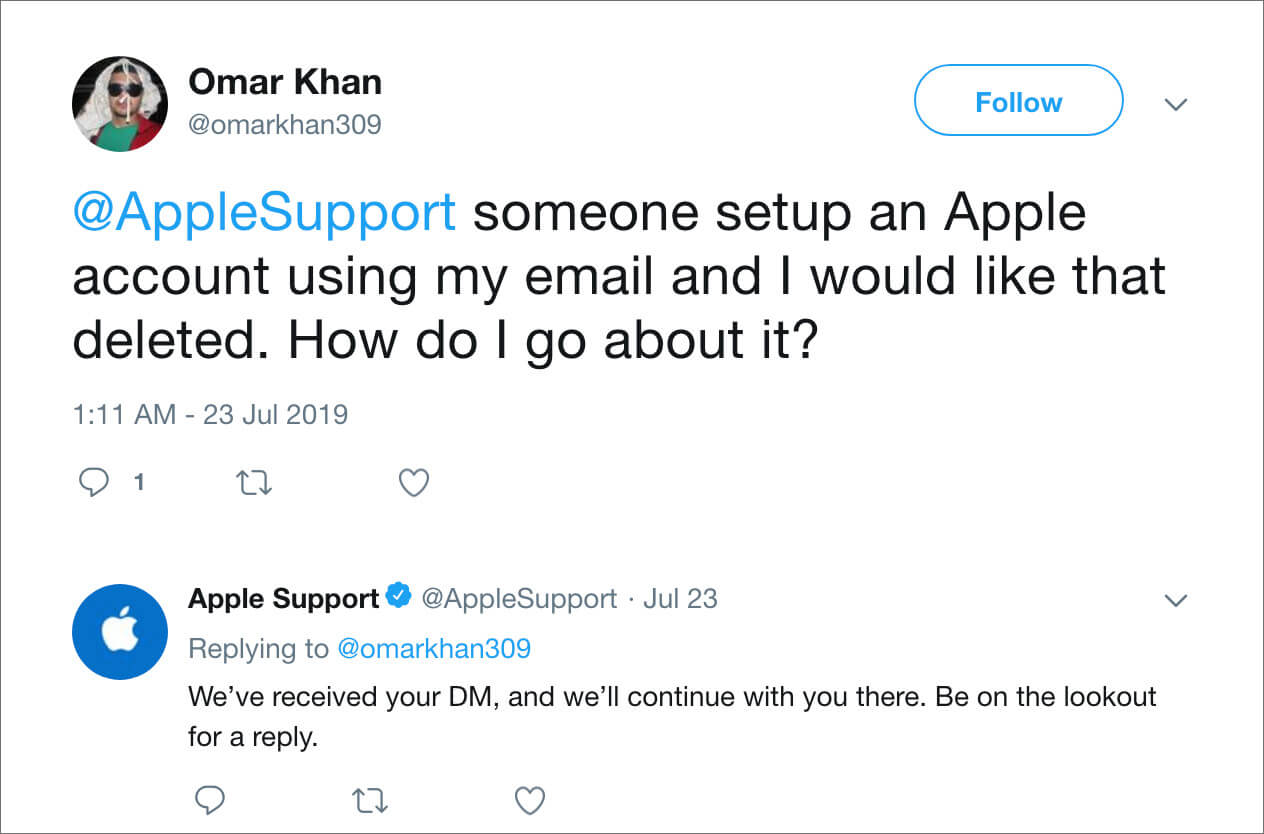 For every brand being innovative, funny and engaging, there are a hundred not making the best of the platform’s unique qualities. This list could go on forever, but here are just a few examples from very big brands guilty of being Twitter feed wallpaper.

Burger King has built a reputation within the Twitter community of being responsive, funny and controversial over the last few years. The UK account even boasts the most-liked branded Tweet of all time after it called out Ye himself: 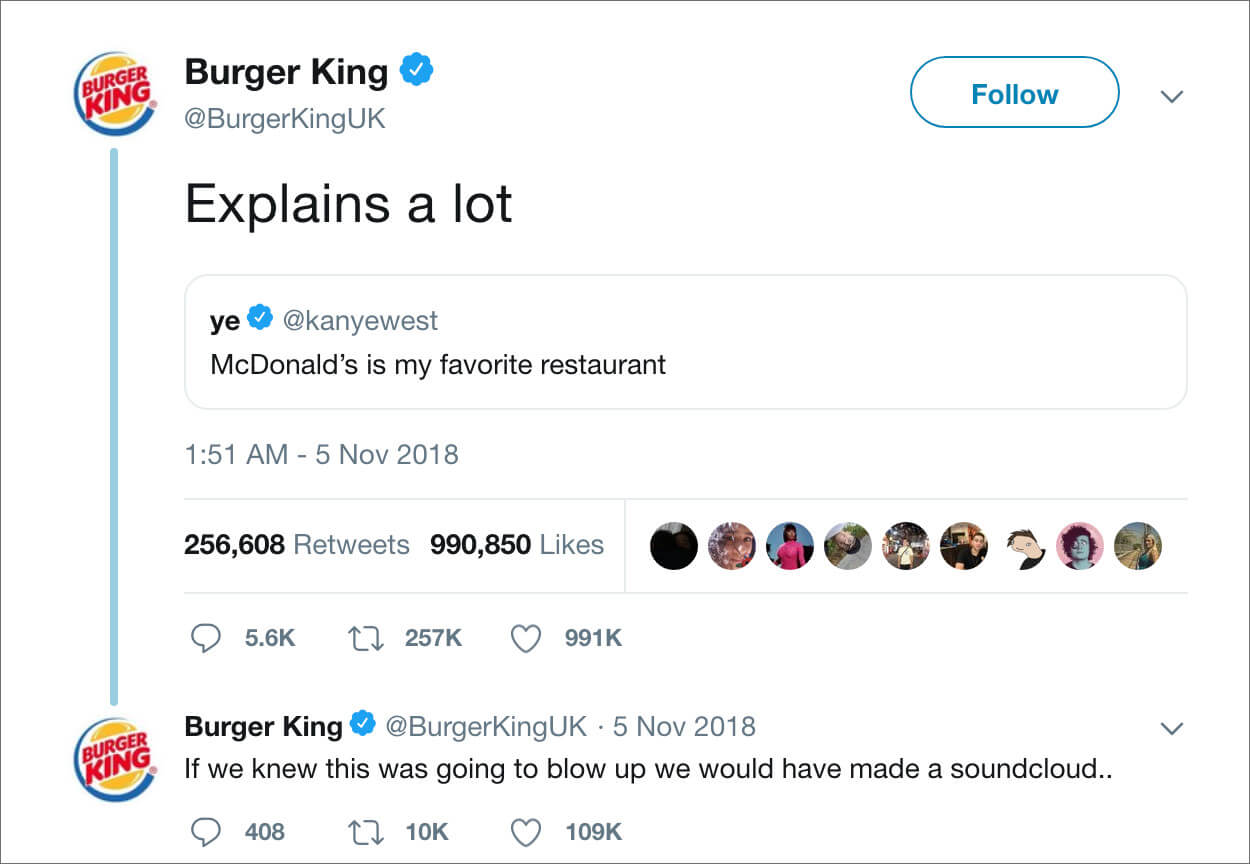 But McDonalds? Post after post of product, product, product which regularly draw in a mere 40-60 likes on an account with over 213k followers. There’s nothing wrong with it, some of the animations are very good and the activation around the #McNuggetsTour Van has the potential to be really fun. But a timeline full of Veggie Wraps and Nashville Chicken is never going to set the world alight.

Bright images, flat lays, influencer collaborations; so far so good right? The only problem is, Twitter isn’t Instagram. When a platform is clearly a low priority for a brand, the content from areas that are more of a focus are recycled, often word for word, and reposted. The result? An Instagram account where each post garners likes in the thousands, and a Twitter account where posts rarely get above 30. Either give it the attention it deserves, or put it out of its misery. 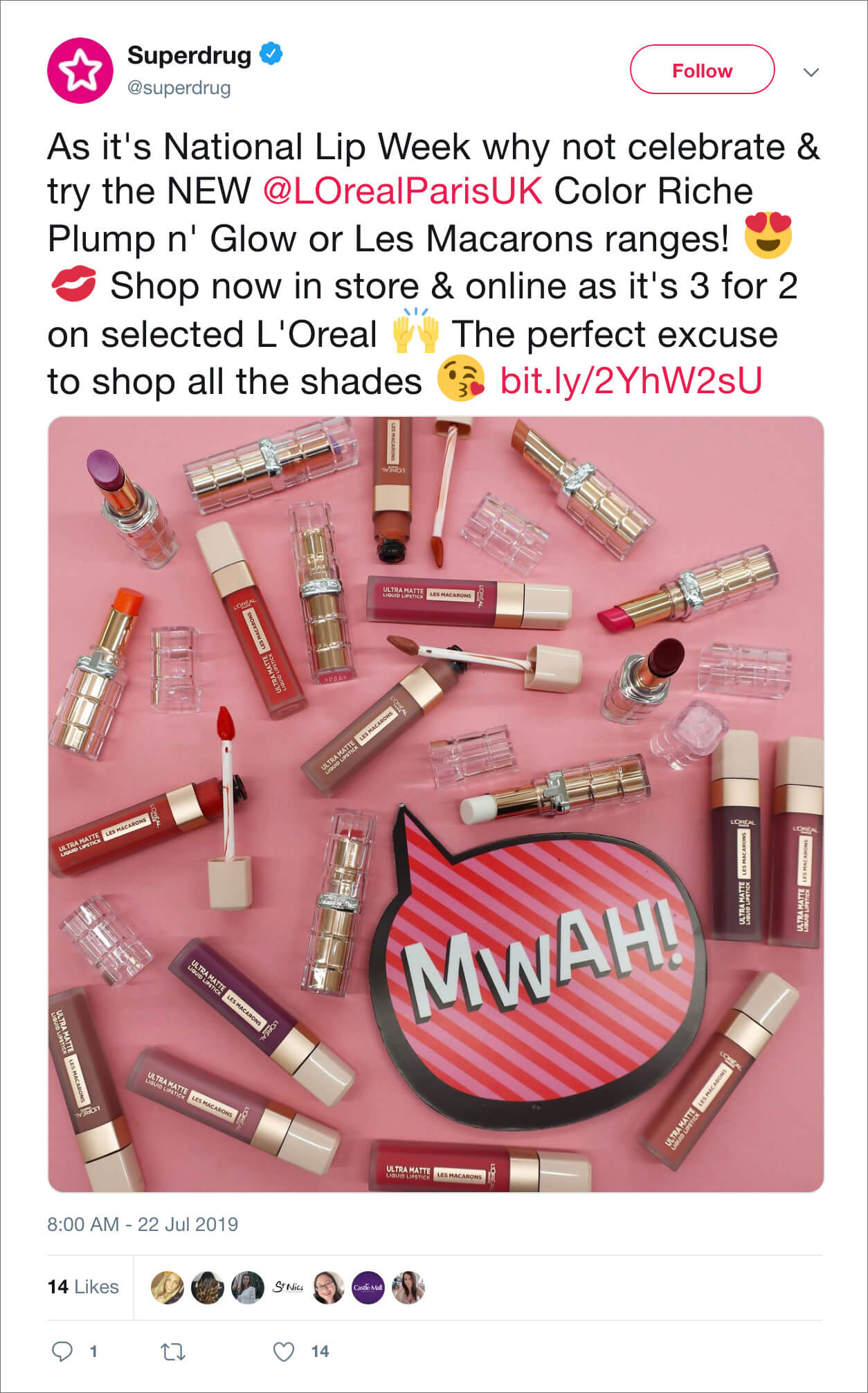 Nazis, Donald Trump and bots, Twitter has become an increasingly gloomy place of late and it’s only understandable that brands are struggling to see the light. Some worry that even participating on the platform could drag them into the fug of pessimism and general existential dread that seems to hang over 90% of the timeline.

But if Twitter keeps losing the good guys, it will one day become just a platform of negativity, customer complaints and misplaced flat lays. Instead, try to bring a little bit of light into users’ days and your messaging will cut through more than ever before.

Just take this simple and brilliant exchange between Yorkshire Tea and a (what turned out to be parody) racist account. No political side taking, no rudeness, just gentle humour with the hint of an edge to it. 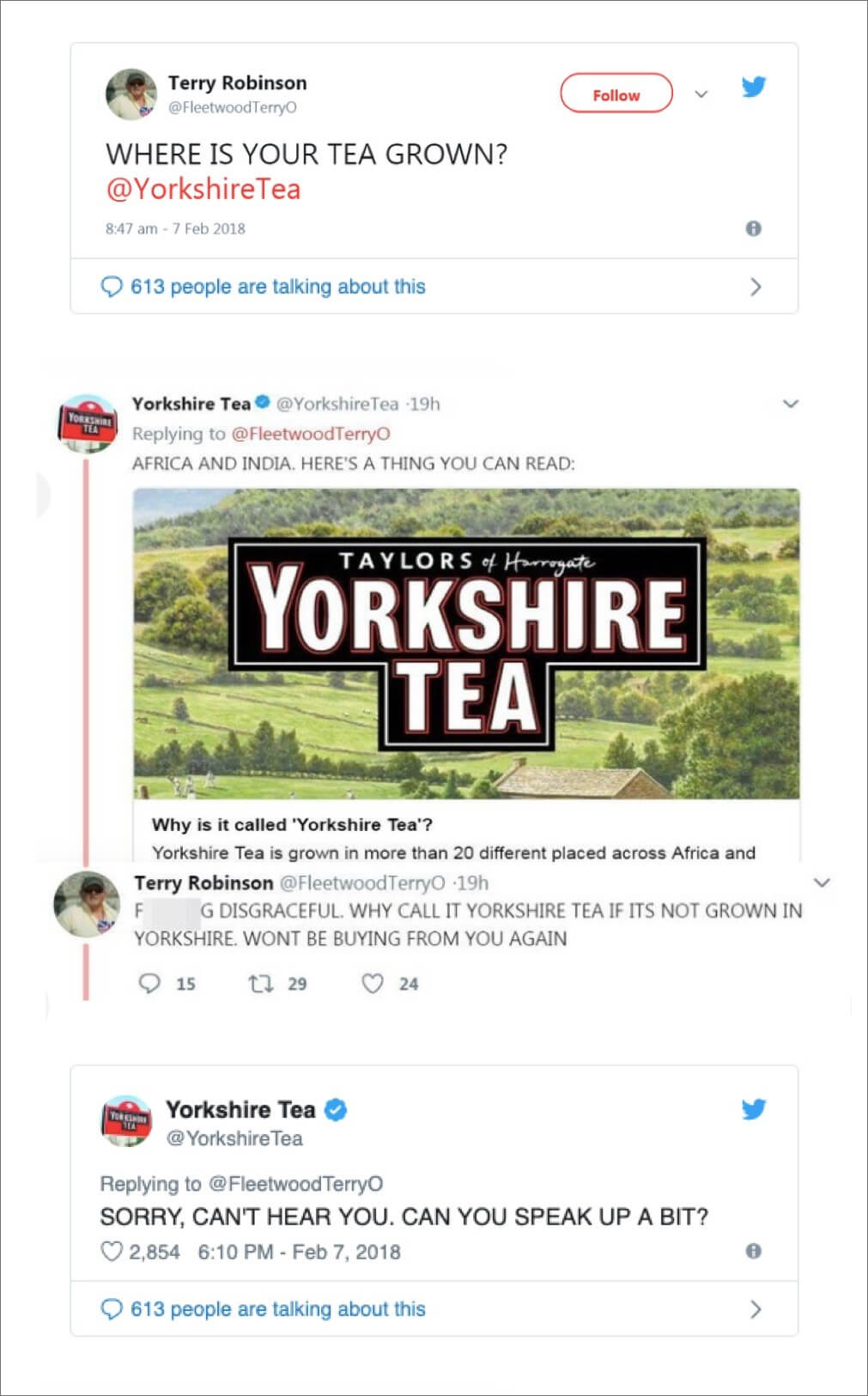 Twitter is not just another “social” tool or a platform to be used just for the sake it because it’s there. Used correctly it can be a powerful vehicle to communicate to your customers and grow your audience. It’s a chance to show real personality, to cut to the heart of difficult situations, to head off crisis, and yes still to advertise. But it requires a change of attitude. If I could give you three pieces of key advice?

Decide what Twitter is to your organisation. Is it to drive traffic? To drive awareness? A customer service platform? Whatever you decide should be best for you – but why drain resources by using it as a space filler.

Figure out what makes you interesting, and put it out into the world. The internet is hungry for facts, compelling stories, human interest, feel good nonsense and, yes, even massive sheep. Not sure you can be interesting? If the The Museum of English Rural life can do it, you can.

Let go. Hand the reins over to someone who understands both Twitter and your organisation inside and out (full disclosure, this may not be an agency). Given some freedom and the space to get involved and get creative, you might start seeing the benefits that only Twitter can deliver.

Oh, and use the mute button. Seriously.

Hi, what is your name?